The Vineyard story is about ordinary people who worship and serve an extraordinary God. The Vineyard is simply one thread in the rich tapestry of the historic and global Church of Jesus Christ. But it is a thread of God’s weaving.
​
​In the late 1970’s in Cambria, a bunch of “twenty-somethings” gave their lives to our Lord Jesus Christ. They started meeting weekly in homes and would go to Cayucos Christian Fellowship to attend church on Sundays. It became their desire to start a church in Cambria. In the early spring of 1980, that group approached Daniel and Denise Brill to join them and pastor the founding of this church.

We have gone through a succession of pastors since the early days: Bobby deLancellotti 1985-1995, Kin Lancaster 1995-2000 and now our Senior Pastor Gary White, who has served with us since the fall of 2000.

From the beginning, Vineyard pastors and leaders have sought to hold in tension the biblical doctrines of the Christian faith with an ardent pursuit of the present day work of the Spirit of God. Maintaining that balance is never easy in the midst of rapid growth and renewal. ​
John Wimber was a founding leader of the Vineyard. His influence profoundly shaped the theology and practice of Vineyard churches from their earliest days until his death in November 1997. When John was conscripted by God he was, in the words of Christianity Today, a “beer-guzzling, drug-abusing pop musician, who was converted at the age of 29 while chain-smoking his way through a Quaker-led Bible study” (Christianity Today, editorial, Feb. 9 1998).

Our first public meeting room was the chamber of commerce in 1980. Then various schools and halls over the years. In 1997 our current permanent building site became available. Through fits and starts the property was purchased and subdivided in 1999 with the current land configuration. It was shorty after this time that a ballon payment became due and the other local churches of Cambria, (spearheaded by the Community Presbyterian Church) secretly raised the needed funds and presented them to the Vineyard Church, keeping the dream alive! The first phase of our facility was completed in September of 2009.

Our vision for future phases of building include: a church sanctuary, a fellowship hall, an education building and a prayer chapel. Buildings aside, our focus has always been about people with our mission, “to love God, to love others, and help others do that too.”

​We are honored to have you with us in making a difference in peoples’ lives for the glory of Christ both now and for eternity.

The Community Presbyterian Church of Cambria has a long and rich history. Formally established in 1874, it was the first Presbyterian church to organize in San Luis Obispo County. This first congregation raised funds to build the little white church on Bridge Street, which has since been a home to several other churches here in town. The church eventually grew to need a larger meeting space and has been at its current location at 2250 Yorkshire Drive since the mid 1960s.

We currently have 10 am services on Sunday mornings, with a special Communion service each first Sunday of the month. Upon arrival to church, you will be heartily welcomed by one of our ushers. Giant stained glass windows, designed by a local artist, adorn the sanctuary, providing beauty and enhancing your time of worship. Current Pastor, Dr. Rev. Anthony ’Tony’ Osimo brings biblical truths to life and shows how they are relevant in our lives and world today. Following service, we have a coffee fellowship where you can meet the wonderful members of our church family.

We have ongoing Bible studies and fellowship groups, and a bi-yearly thrift sale (donations welcome Monday mornings from 9-11:30am). Please check out our website for more information!

What started as a small Bible study on the Sibley Ranch on the south end of town over 50 years ago, grew to become First Baptist Church of Cambria, or simply “FBC.” In the early years, FBC moved locations several times until the construction of the iconic church building at the corner of Ardath and Highway 1. Over the years we have grown and changed along with the sweet town we call home, but what has remained constant from the beginning is a deeply held commitment to the worthiness of God and the trustworthiness of the Bible, His divine message to us. FBC is a warm, unpretentious ‘family’ where everyone is welcome. Though we take following Jesus very seriously, we try not to take ourselves too seriously. We think you’ll love it here. But don’t take our word for it, come see for yourself!

New Camaldoli is a community of Benedictine monks of the Camaldolese order. Our monks live religiously, in seclusion and prayer for much of the day. Four times a day they gather together for prayer. Other times of the day are spent working, in contemplation or prayer for the world. The monks are stewards of the incredibly beautiful and spiritual land that holds their hermitage, and they invite those seeking solitude, silence and prayer to come stay with them and to even pray with them. The hermitage has 9 single occupancy retreat rooms and 5 private single/double occupancy retreat cottages or “hermitages” for visitors to stay in. All meals are provided. There is no television, no internet, no telephones to distract one from the silent retreats that are offered those seeking a break from the frantic pace of the world. All are welcome to come visit during the day – our chapel, prayer services and lovely bookstore/gift shop are open to the public. Sorry, but only registered guests are allowed in the retreat house areas. Visit our website to find out more information, prayer schedules, or to reserve a retreat for yourself or a loved one. Come disconnect from the frantic world and connect with the voice deep within you.

The chapel was built for the local Roman Catholic community by Henry Williams and was the first church built in the county after its establishment in 1870. The chapel served the community for 91 years, and among its congregation included guests of William Randolph Hearst, Marion Davies, Gary Cooper and Bing Crosby.

The Old Santa Rosa Chapel can host up to 85 persons.

SAFE HARBOR PRESBYTERIAN CHURCH http://safeharborcambria.org/
Community Faith Fellowship where the love of Christ builds a Harbor of Acceptance, Inspiration, Fellowship, Service and Joy. We are a community of friendship, here to support each other. And to serve the community in the light of Christ, especially those with needs. We are here to grow our faith with an inspired and illuminated pulpit . And we are here as a Safe Harbor of Love and acceptance
Sunday Worship – 2:00pm, on Zoom.  Email for log in information
2700 Eton Rd., Cambria, Ca. 93428
phone – 805-395-1521 info@shpres.org

Listen to past service:   https://www.youtube.com/channel/UCuXk23TvA7VxKq1bc9U1R8Q

“Loving Christ by Serving the Needs of Others” 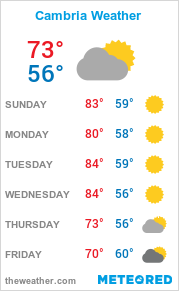 Become a Member
Make a Payment
Claim your member listing

Open Monday through Friday 9 to 5
Please call first on weekends.